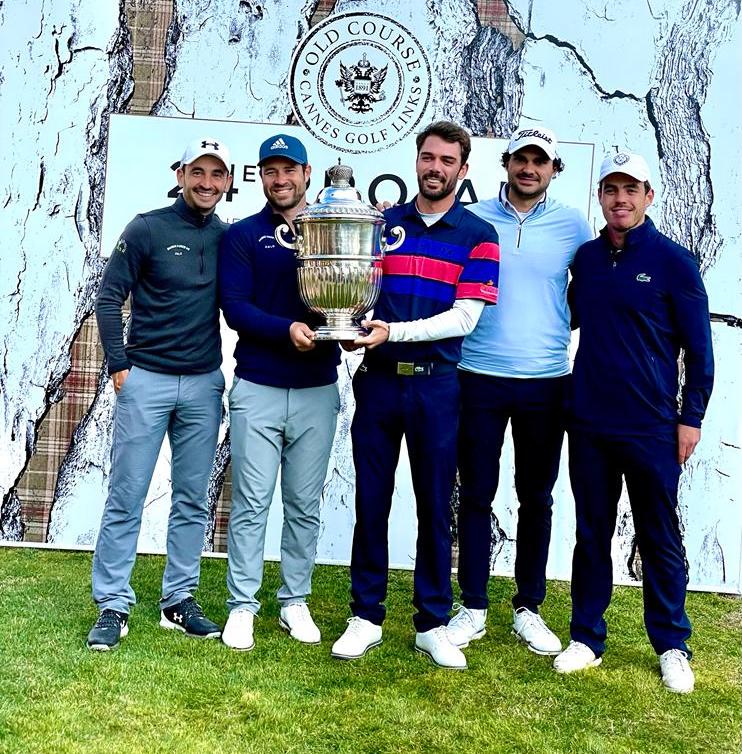 In preparation for the Challenge Tour and the Alps Tour, several professionals met last weekend at the Old Course in Cannes Mandelieu. And it was the likeable Reunionis, Alex Daydou, who won without a doubt, among the Pros, on Sunday in singles, while the very solid team of Paul Margolis made the Gross/Net double.

“It was a somewhat special edition because it was named after Jean-Dominique Camerini (the brother of Jean-Stéphane, owner of the Old Course) and because it is a very warm club, like a big family”, says Alex Daydou, delighted with this life-size preparation on a route he knows well because he often plays there with his partners, in particular Philippe Chevalier, the head of Set Cargo (international logistics).

A long-time licensee at Cannes-Mougins, Daydou is coming off two years complicated by Covid and a major injury, an acromioclavicular dislocation that caused him to lose a lot of time.

As a result, he has only played a dozen tournaments in two and a half years and has high hopes for this year 2022. He will return to the Alps Tour to “try to win many tournaments” and go full force towards the Challenge Tour, where he already has a partial category. His scheduled debut in Italy, at the beginning of March in Abruzzo, after this Pro-Am allowed him to refine certain settings.

It wasn’t perfect, because I’m a perfectionist, but I only played for three days.

Never losing sight of his ultimate goal: to prepare well, with live ammunition, for his first full season since 2019.

“It wasn’t perfect, because I’m a perfectionist, but I only played three days, I made the right strategic decisions and, above all, I handled the last game well, on Sunday, with Jean-Baptiste (Gonnet) and Jerome (Lando-Casanova). It was a good test to play against them.” Alex Daydou told Golf Planète on Monday, before leaving for a great week of training on various courses in the Alpes-Maritimes and Var, in the company of Paul Margolis.

“I feel very good in this course, congratulations again for the organization and the preparation of the ground, which was incredible. It allowed us to have a lot of fun and give our best »Daydou said at the awards ceremony, during a very successful Garden Party, very close to the new 18 green completely renovated at the start of the pandemic.

To give an idea of ​​the level of this Pro-Am, Daydou finally beat the neo-pro from Grasse alexander fuchs by 4 strokes (-12) while Jérôme Lando-Casanova, ambassador of the Old Course on the Challenge Tour, completed the podium at -10, ahead of JB Gonnet (4th) and clement sordet (5th). A Top 5 high-flying to close this 24th edition that will have brought together nearly 100 amateur golfers and more than thirty professionals. Long live 2023!

Photo credit: Nicolas Wileski / Around the trophy, from left to right: J. Lando-Casanova, JB Gonnet, A. Daydou, C. Sordet and A. Fuchs