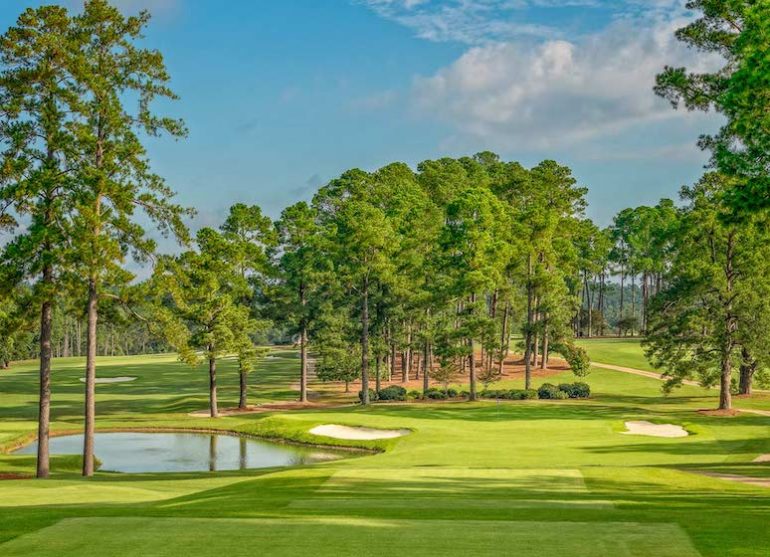 As one of the oldest American courses, the Augusta Country Club can lay claim to being the oldest course in the city of Augusta, Georgia, where the prestigious Masters is held each year. Not in vain the history of the first Major of the season is closely linked to this venerable century-old club.

Behind the fence, between brambles and bushes, we discover number 12 Augusta National, as if through the small holes made in the theater curtains we could see the room. And on the fence, a few openings through which the free riders calmly accessed the Masters…

With this fence, only the famous Rae’s Creek separates Augusta Country Club from its glorious but younger neighbor, in the heart of a territory of identical nature within which there still exists, along number 11, a cemetery whose green decoration invites really to eternal rest. .

It was here that Bobby Jones came to win the Southwestern Open in 1930, he played in this club opened in 1899, for a long time the base of the future American women’s tour.

At the time, it received the famous Title Holders Tournament, a kind of Masters for Ladies won by Patty Berg in 1937 or Kathy Whitworth in 1966 for its last edition. And it was a young man from the club who wrote another famous page in history, by winning the Masters, in the play-off of a miraculous blow inflicted on Greg Norman in 1987.

Since then, Larry Mize has been an Honorary Member of this Augusta Country Club whose history is told by paintings, photos, trophies, and manuscripts that adorn the corridors of the huge clubhouse renovated in 1989, whose terrace is ventilated in summer by two giant fans.

Land at a high price

Here, we are in the heart of deep Georgia, where most of the members are from, unlike the three hundred of Augusta National who come from the four corners of the United States, only thirty of them double.

Between the Fielding Wallace House, the former residence that belonged to one of the club’s founders, converted into a Pro-Shop until 1920, and the majestic clubhouse frequented by 1,400 members, including tennis fans, a large field very much infused with the style of Donald Ross , one end of which was sold at a very high price to the Augusta National Golf Club to lengthen its par 4 hole 11 and the famous par 5 hole 13.

Our Donald Ross is “correctly” difficult, likes to describe Mike Corey, one of the club’s pros, who remembers the excellent recent rejuvenation of Brian Silva.

In fact, we did not suffer too much there, although the uphill Par 4 is close to 400 meters, if the number 8 exceeds 540, if the number 12 is a Par 3 where the emotion is experienced throughout its 204 meters. … The highlight, the green of the peninsula of number 7 whose slopes descend abruptly towards Rae’s Creek, the border river between these two private clubs that are accepted without being fair robbers, their qualities are not opposable….

Comparing two masters like Alistair McKenzie to Donald Ross is a waste of time.

Watching and consuming without moderation is much more exciting.