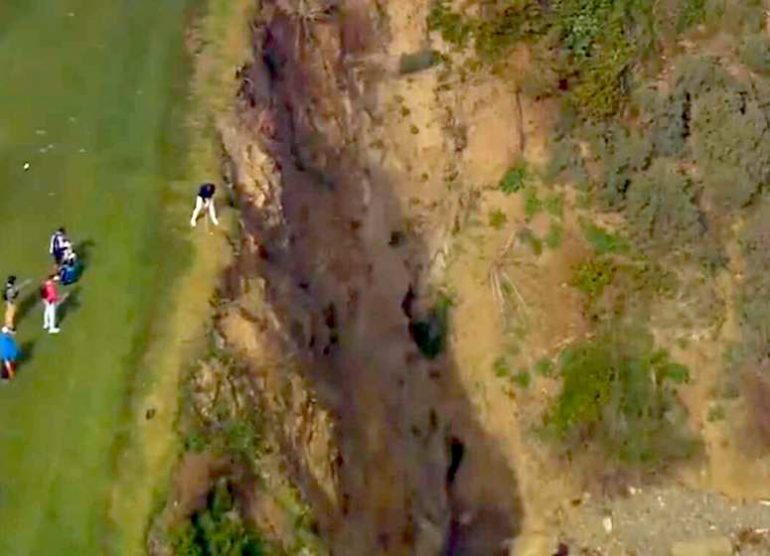 The least we can say is that Jordan Spieth made his fans break out in a cold sweat on Saturday at Pebble Beach. After his throw-in in the 8th, the Texan found his ball in the penalty area, but just inches from the edge of the cliff overlooking the Pacific Ocean!

-4 after 7 holes Jordan Spieth wasn’t determined to put an end to his strong start to the 3rd round at Pebble Beach.

On the 8th the spectacular par 4 dogleg left of the US Open course the cliff is so close that the penalty area is only 2 meters from the precipice. And it is precisely there where the Texan found face to face with him.

“This is downright scary right now. »

This Jordan Spieth shot was quite a situation. 😬 pic.twitter.com/sq04R96GXQ

It’s not very smart. Looking back, I regret doing it.

If the shot doesn’t look all that terrifying from the camera positioned on the player’s side, the aerial view offered by the PGA Tour drone provides the thrill!

Spieth walked with his back to his ball, telling his caddy Michael Greller that he was the “The most creepily edgy shot of his life he’s ever had to play” and we got it!

Spieth then admitted that wasn’t very smart of him. “It’s not very smart. Looking back, I regret doing it.”

His faithful co-pilot is even more severe. “I don’t understand the interest. Next time I’ll pick up the ball and throw it in the water to prevent him from playing it.”