Six-time major winner Sir Nick Faldo has revealed that his project for the course, accompanied by the creation of an academy, involved the redesign of the Val-Grand site at Bondoufle.

Sir Nick Faldo himself revealed that his latest course creation project would see the light of day in France. This is a great first for the Englishman, who has ambitions to create a “country club” with a top-tier academy. 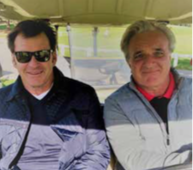 Located just over 25 km from the center of Paris, the new design aims to accommodate the community surrounding the club and offer both a test of strategy and the pleasure of playing golfers of all levels.

The English champion had been seen there two years ago, at the invitation of the president Jean Louis Schneiderr, former junior champion of France, former professional on the circuit, before buying at the age of 35 Val Grand located in Bondoufle, not far from his birthplace, Fontainebleau. He then told us: “We have ambitious plans. and Nick Faldo’s visit last September had something to do with it. Let it be clear: the activity is not easy and we have been working tirelessly for more than 20 years! The competition is fierce and we care about it. in constant renewal…”.

The first Val Grand design was the work of Michel Gayon.

As part of the course overhaul, Faldo’s design team plans to completely remodel all 18 greens to USGA specifications, but also redesign many of the fairways and revitalize the bunkers.

The original features of the course, in particular its series of water features, will be further highlighted to reinforce the spectacular side of the Essonne course and thus offer a truly memorable playing experience.

Have fun, learn and relax.

A pact in the making

In addition to the course, the project will also promote the development of teaching and practice with the creation of a high-end golf academy, equipped with state-of-the-art technology, as well as a compact nine-hole course to support and encourage accessibility. .

The clubhouse will also undergo major renovations, a pool, spa and tennis courts will see the light of day.

“We are delighted to announce our collaboration with Val-Grand and are very excited about the potential of the course and the site as a whole. The goal is for golfers of all levels to have fun, learn and relax.”Faldo said.

“It is a unique site, with a unity between all the playing surfaces. The conifers create almost a wasteland environment, while the lakes and the rest of the nature that surrounds it give the feeling of being in the heart of a park.”

“This variety, so close to Paris, I think will create an excellent course where people will like to come to play but also enjoy new facilities that accompany this ambitious investment project desired by the owners.”